So you’re interested in travelling to Ljubljana, but you haven’t quite made your mind up yet to book those flights? Or maybe you’ve already printed your boarding pass and squeezed a week’s worth of clothes into your hand luggage bag, but now you’re looking for some guidance? In either case you’re on the right page.

As well as writing over 30 stories on all aspects of Ljubljana, from the fine dining scene to the street art, and recording these videos (so you can get a sneak preview of the Slovenian capital for yourself!), the diverse members of The Travel Mob also wanted to offer a little present to any would-be Ljubljana lovers out there.

In our free e-book to Ljubljana, each of the Mobsters has reviewed their favourite six hang outs in the city. From unmissable sights like the castle, Tivoli park and the City Museum, to avant garde galleries, the flea market and a range of hip bars, cafes and restaurants, you’ll be spoiled for choice whether you’re into culture or the more epicurean pleasures! The e-book comes with practical advice on getting there, accommodation and tours, as well as a story about Slovenian cuisine to get your mouth watering.

You can download it here for printing or perusal, or if you prefer access the same info online. 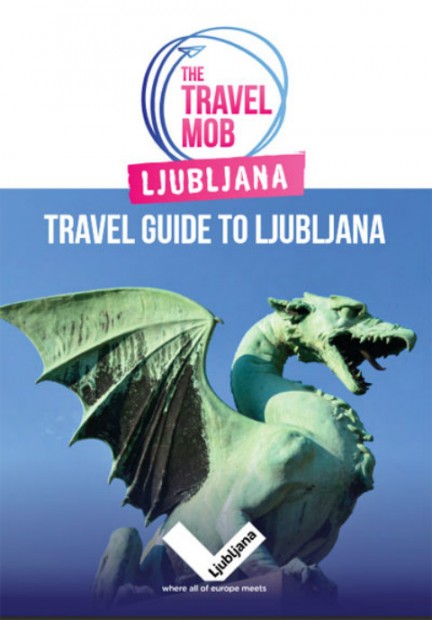 The name Taste Ljubljana is not just the name of our blogtrip, but the name of an initiative by the Ljubljana Tourism Board to invite locals and visitors alike to enjoy the traditional delicacies of the region, prepared according to authentic recipes, at restaurants all around the city.

The project’s launch day was the 26th June and of course we were on hand to witness this fun – and filling – event on Ljubljana’s Novi trg (New Square). As a traditional band regaled us with folk music, and speakers from the world of tourism and gastronomy introduced the concepts behind the initiative, some of the city’s best chefs were busy in the background preparing dishes like cottage cheese pancakes, boiled beef tongue, Ljubljana egg dish and fried chicken drumsticks all for the delectation of the audience.

Once the talking was over it was time to queue up for these snacks (they were free for all!) and sample some of the classic Slovenian fare that has been enjoyed for decades, or even centuries, right where we were standing! I myself made a beeline for kiosk serving cottage cheese pancakes with tarragon, which were light and fluffy in texture, sweet and tasty, and were once served both as a main dish or as a dessert. Next I jostled in line for the Ljubljana egg dish, a savoury pie of egg, breadcrumbs, mushrooms, herbs and lemon peel, that originated here in the Slovene capital and whose recipe was recorded by Magdalena Knafelj-Pleiweis in one of the country’s first ever cookbooks. Sadly I was too busy socialising to get my hands on the “Flying zganci”, the fried chicken wings, that were apparently much loved by the city’s hard-working dockers, who ate them in the Pri Zlati Ladji tavern by the port. Adam from Travels of Adam, however, assured me they were delicious.

The good news is that not only I, but anyone visiting Ljubljana, can sample all of these dishes – and many more – in scores of restaurants around the city any time we like. As part of the Taste Ljubljana gastronomic initiative 28 traditional dishes and drinks have been researched and recorded by leading expert Dr. Janez Bogataj, and currently 49 bars and restaurants are offering one or more of these very dishes/drinks as part of their everyday menu. When you get to Ljubljana just head to the tourist office and ask for the Taste Ljubljana book or magazine entitled “Long for Its Dishes, Ljubljana’s Been Known” (the title is a play on words of the opening lines of the poet Preseren’s famous ballad “Urska and The Water Man”), which details all of the plates you can expect to try – and in which restaurants you can find them. Just to get your mouth watering I’ll mention Kranjska sausage, Vodnik’s lamb lettuce salad, potica cake and Preseren fig pralines… but these are just for starters!

With its rich culinary heritage influenced by the Mediterranean, Austria, Hungary, Italy and even Turkey, and the abundance of great locally-sourced ingredients, every traveller should aim to sample some of these traditional recipes, now prepared in a modern way by the city’s best chefs. The Visit Ljubljana website has more information. Dober tek!

…ps. don’t forget to check out our other articles about Ljubljana’s gastronomic scene, just as Jaillan’s experience at a Slovenian cookery class, plus her guide to the capital’s luxury dining scene, Adam’s favourite Ljubljana meals, and Pola‘s introduction to the city’s sweets and desserts! There are also several great restaurant recommendations in our City Guide (coming soon!).

So we’re on our way to Ljubljana for our first ever trip together! Excited is naturally a bit of an understatement. I’ve only ever heard great things about the Slovenian capital, which is not only supposed to be alluringly beautiful, but also pack a tasty punch when it comes to culture, nightlife and gastronomy. In fact it’s the Slovenian food and drink that we’re going to be paying special attention to.

A small country of just over 2 million people, perhaps it’s not surprising that compared to some of Europe’s famous foodie countries (the obvious ones being France and Italy!), Slovenia has been overlooked, but when you consider that this is a nation that borders Italy, Austria and Hungary, and borrows heavily from all three culinary cultures – as well as others, then you can start to imagine that there’s plenty to sink your teeth into.

From homely recipes, laid down back in the day by pioneering priest and poet Valentin Vodnik in the country’s first ever cookbook (they don’t get any more traditional than that!), to haute cuisine by some of the most avante garde Slovene chefs, we’ll be tucking into a range of great foods during our June visit… and not only food! Here’s a fact for you that you probably didn’t know. Slovenia has 216km-squared of vineyards… that’s over 10% of the country. Safe to say then, that we’ll be tasting a fair bit of wine to go with those frog legs, boiled beef tongue and cottage cream pancake delicacies. We’re also delighted to hear rumours of the worldwide craft beer revolution reaching Ljubljana, so expect some notes back from a hop-fest of a tasting tour.

The #TasteLjubljana theme of this blogtrip is not to be taken for just it’s literal meaning however… it’s also symbolic of our desire to “try out” and experience all of the Slovenian capital with all of our senses. We’ve heard about prisons converted into hostels, bike factories transformed into art centres, a lively bar scene, a wealth of green spaces, a rich summer programme of arts and culture (including the celebration of Ljubljana’s former Roman incarnation as the town of Emona – and guess what they’re celebrating 2000 years of Emona in 2014!) and plenty to see and do outside the city too… the most famous perhaps being the breathtaking Lake Bled up in the Alps, although there’s also the UNESCO listed Škocjan Caves, the Lipica Stud Farm (horses that is, not Chippendales) the Emerald river and the coastal resorts of Piran and Portoroz. Check out this list of day trips on Visit Ljubljana’s official website for more!

Heading on the trip will be several great personalities from The Travel Mob team, including Adam Groffman of Travels of Adam, Pola Henderson of Jetting Around, Jaillan Yehia of SavoirThere, Brian Cox of The Travel Vlogger, Monica Stott of The Travel Hack and myself, Duncan Rhodes of Urban Travel Blog. Click on any of the individual links for their websites and social profiles, or follow us collectively via Twitter, Facebook and Pinterest.